The Tomb of Dracula Vol. 1 – Review 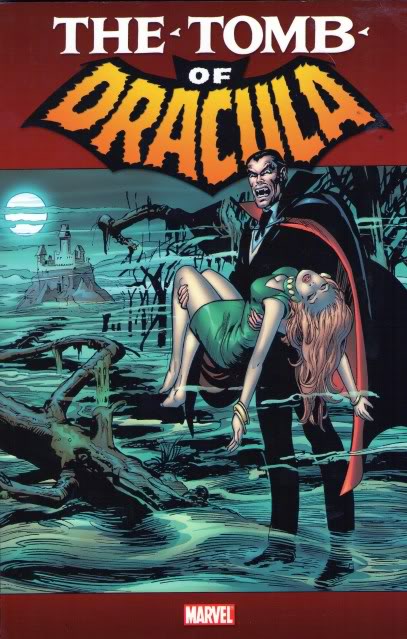 I saw this at the local Books-A-Million this past August and it was marked down to $9.99 (from $24.99!) as a part of some ‘end of summer’ graphic novel sale they were having. I know there a few Marvel Essential collections of Tomb of Dracula but I figured for $9.99 it was good enough to check out the first 12 issues of the series in full cover rather than having to flip through newspaper-quality black & white pages of the Essential Tomb of Dracula editions. I didn’t want to read a Dracula comic book in August though so I waited impatiently until October when I knew the time was right!

It’s a pretty good read that feels like a Hammer film often at times (one of the characters even mentions the British horror movie studio). What I really like about this book is how there is one large story arc, that of Frank Drake (a descendant of Dracula) and Rachel Van Helsing (great grand-daughter of Abraham Van Helsing) trying to destroy Dracula, while the issues feature self-contained stories that involve Dracula trying to raise the dead, a weird furry swamp monster stalking the Moors, Dracula bringing a female vampire frienemy back to life, an aging model wanting to be turned into a vampire to remain young, a travel through time & place thanks to some dark magic mirrors, voodoo dolls, etc. The series, at least in these first 12 issues, plays out much like you’d expect a television drama to: supporting characters come and go, potentially major characters are introduced only to be killed off, issues focus on some characters more than others, etc. I’m not familiar with Marvel’s Dracula lore at all so there’s been some nice twists & turns as I’ve been reading this.

The Tomb of Dracula series is also famous for introducing Blade: The Vampire-Slayer. Despite being a C-list character in the Marvel Universe, Blade would later go on to have his three movies and one failed TV series to his name in the late ’90s/early ’00s. It’s really the Blade movies that helped propel Marvel in Hollywood. It’s interesting to Blade here in a gaudy ’70s outfit (Is he color blind?) complete with an afro rather than in the grittier black leather we are most used to seeing him in these days.

A couple of different writers worked on these first twelve issues: Gerry Conway, Archie Goodwin, Gardner Fox and Marv Wolfman. They all do decent jobs although I think the series improved when Wolfman took over starting with issue seven. Gene Colan illustrates all of these issues and while he would never make my list of favorite artists I think his style works well considering the material.

This was my introduction to Marvel’s take on Dracula and I enjoyed it a lot. Now it’s time to go all in a pick up the Essential volumes…