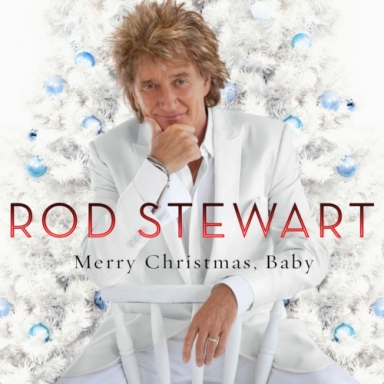 1. Have Yourself A Merry Little Christmas
2. Santa Claus Is Coming To Town
3. Winter Wonderland
4. White Christmas
5. Merry Christmas, Baby
6. Let It Snow! Let It Snow! Let It Snow!
7. What Are You Doing New Year’s Eve?
8. Blue Christmas
9. Red-Suited Super Man
10. When You Wish Upon A Star
11. We Three Kings
12. Silent Night
13. Auld Lang Syne
Bonus Tracks
14. What Child Is This
15. The Christmas Song (Chestnuts Roasting On An Open Fire)
16. Silver Bells

For the past decade Rod Stewart has been content to become a crooner covering the “great American songbook” as well as Motown and rock ‘n’ roll staples. Despite having said in the past that he would never do a Christmas album, it was really only a matter of time before he did just that. Rod isn’t a rock star or a pop star anymore. He’s a crooner in the tradition of Crosby, Sinatra and Martin (just as Michael Buble is). You can’t be a crooner and not do a holiday album.

Rod has not been taking any chances in the past decade when covering the materials of others. The songs are played faithfully and in their traditional big-band fashion just with Rod’s raspy vocals laid over. A few exceptions would be songs like “Let It Snow! Let It Snow! Let It Snow!” or “Winter Wonderland” where the tempo is a bit slower. It’s easy listening background music at a Christmas party. Not that I’m complaining.

These songs are classics for a reason and in my opinion they don’t need to be remixed or refashioned into flamenco, country and dance songs. Just give someone with a great voice the mic and let’em sing. That’s exactly what’s been done with Merry Christmas, Baby.

As standard, there’s a few cameos on this album. Michael Buble appears on “Winter Wonderland”, Cee-Lo Green lends a hand on “Merry Christmas, Baby” and Mary J. Blige duets with Rod on “We Three Kings”.

While I can’t say I’ve ever really followed Rod’s career, he’s always had a great distinctive voice so it’s wonderful to hear to him put his vocal stamp on these timeless classics. There’s a couple of songs I didn’t really care for though. “Red-Suited Superman” being one and I felt the inclusion of “When You Wish Upon a Star” was out of place. Why not just save that for the next volume of his Great American Songbook series? That’s not really a Christmas song at all.

In any event, this is a good easy-listening Christmas album that’s well worth picking up for Chrirstmas traditionalists.

Highlights: “Have Yourself a Merry Little Christmas”, “Winter Wonderland”, “White Christmas”, “Silent Night”, “Auld Lang Syne”, “What Child Is This”

Buy the album at Amazon.com