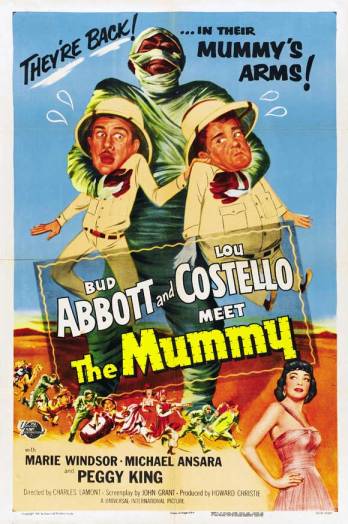 Abbott and Costello Meet the Mummy
1955, Universal Pictures
Buy the movie at Amazon.com

I’m reviewing this from a VHS copy. I don’t own it on DVD, but the public library has a VHS copy so I dusted off the VCR for the first time in over three years to watch this movie. It’s very weird watching a VHS tape while using a fairly new HDTV.

After the success of 1948’s Abbott and Costello Meet Frankenstein, Bud & Lou sure did “meet” a lot of people. For the most part, the meet & greets were limited to Universal’s classic monsters. After having all kinds of comedy hijinks involving Frankenstein’s Monster, Dracula, the Wolf Man, the Invisible Man and Dr. Jekyll & Mr. Hyde, it was time to send the boys to Egypt to meet up with the Mummy.

This mummy’s name is Klaris. The original Mummy movie starred Boris Karloff as Imhotep but the four Mummy movies following that featured a mummy known as Kharis. So why is this guy called Klaris? Either call him Kharis or call him something NOT similar. I guess the writer’s were lazy and, with the absence of home video, figured no one would care or notice. 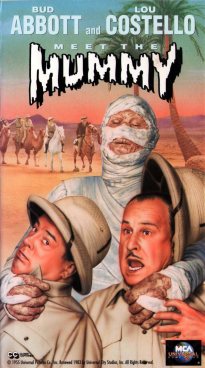 You’d think by this point that not only would Abbott & Costello’s entire act be tired but so would the gimmick of them meeting a monster. Not true at all. Yeah, this isn’t on par with their classic …Meet Frankenstein movie (and part of that for me is because I’ve never found the Mummy to be all that interesting) but this is an enjoyable way to spend 90 minutes of your life. Looking online, this movie seems to be fairly well-liked by the duo’s fanbase.

The plot is the boys get framed for the murder of an archeologist in Egypt and stumble across a magic medallion that a number of shady characters want and while this is going on, the mummy has been reawakened and he wants his medallion back. All of this, of course, is played for laughs. There’s just something about Bud Abbott smacking around and yelling at Lou Costello that remains funny to this day.

This is not a great film but it’s pleasant enough if you’re a fan of the Universal Monsters and/or Abbott & Costello.

Abbott and Costello Meet the Mummy was the comedy duo’s final film for Universal after a lengthy 15-year (and 28 movies!) run there. Had they stayed with Universal, I’m sure it wouldn’t have been long before they met the Creature from the Black Lagoon! The team did one more movie together in 1956 (Dance With Me, Henry) but broke up the act in 1957.