The fine candy-makers at Brach’s are no strangers to nougat. They’ve been releasing all kinds of seasonal (and non-seasonal) based nougats for years. For myself, the most famous and greatest of them all are their peppermint Christmas nougats with the little trees on them but they’ve also released wintergreen, orange creme, jelly bean, cinnamon, chocolate mint and cherry cordial nougats over the years for Christmas, Valentine’s Day, Easter and Halloween. With Easter the next major holiday, you might think it’s time for Brach’s to start cranking out the Jelly Bean Nougats again. 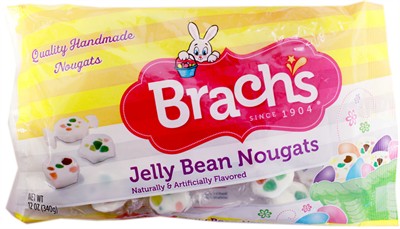 I remember Brach’s jelly bean nougats when they were just called jelly nougats and you could make a pick ‘n’ mix bag of candy at the grocery store.

Well, I’m sure you’re right. I have no doubt the Jelly Bean nougats are going to be out and about somewhere this Easter season but they aren’t at Walgreens and Walgreens is my #1 trusted source for holiday candy. But, no, what I came across was something a bit more interesting…

Ice Cream Nougats. I wanted these as soon as I saw them. I didn’t even let the fact that one of the flavors was banana deter me.

The packaging very much screams “SPRING!” and not so much “EASTER!” but these ice cream nougats are definitely a part of the Easter candy aisle. I’m not completely sold on the whole ice cream theme though. What does that have to do with Easter or springtime? If I’m going to associate ice cream with any season it would be summer. Easter is eggs and bunnies but I guess Brach’s didn’t want to repeat themselves after having the jelly bean nougats. But screw it, they should’ve put an Easter egg in the middle instead of an ice cream cone and called them Easter nougats.

Onto the flavors: vanilla, strawberry & banana. The vanilla is okay. Vanilla is vanilla. Actually, it’s less than vanilla. I think “sugar” would be the more appropriately named flavor. It’s the standard nougat that you would have with the jelly bean nougats. With the strawberry, I didn’t get much flavor at first but after eating a few more, I began to detect a strawberry flavor that is not too far off from what strawberry Nesquik tastes like. The banana is your standard banana-flavored candy. It’s basically a really soft banana Laffy Taffy.

And who eats banana ice cream anyway? Chocolate would’ve been a better substitute but then again yellow is a much better choice of color for Easter than brown is.

What’s weird is if you look at the colors of the ice cream on the actual nougats, they mixed up the flavors. Vanilla is on banana, banana is on strawberry and strawberry is on vanilla. I realize why that was done that way but it’s still strange if you think about it. Even weirder, the color of the strawberry nougat on the packaging is purple. Periwinkle, if you will. What’s up wit’ dat?

Overall, I’m giving Brach’s Ice Cream nougats a thumbs down. While it’s an eye catching package, the ice cream-Easter connection is tenuous at best and the flavors are sub par.