Initially, I was going to place my thoughts on this game in a catch-all type of blog post regarding various topics, but I rambled on so much that this game needed its own post. 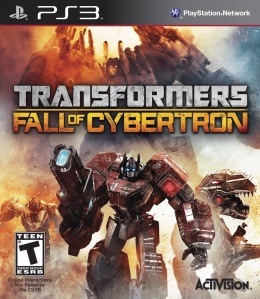 Transformers: Fall of Cybertron (2012) Buy the game at Amazon.com

Let me start off by saying I love, love, LOVE this game. Transformers: War for Cybertron was fun, but this is so much better. It’s essentially the same game-play but with a better variety of playable characters, abilities and levels. It took me two years to finally buy and play this game as I’d been waiting on a price drop, but the wait was worth it.

Forget about those awful Michael Bay movies that are only made enjoyable via RiffTrax, the War for Cybertron/Fall of Cybertron games are everything a Transformers movie should be. THIS is the type of Transformers universe that should’ve been brought to the big screen. No Shia Lebeouf, no Megan Fox, no lame comedy relief or robots portraying racial stereotypes. The Cybertron series is Autobots vs. Decepticons on Cybertron and out in space. Just the way it should be. I couldn’t care less whether they ever come to earth and interact with humans. I don’t want to see a bunch of people talking. All I want to see is robots punching and shooting each other.

The biggest selling point for this game was the Dinobots and the ability to play as Grimlock. Yes, it is as awesome as it sounds. When your rage meter fills and you transform into your T-rex mode you’re basically indestructible for about a minute and can stomp, swat and burn everything in your path. I enjoyed playing as Jazz as well since he has a grappling hook which can be used to pull down walls/enemies and swing up to high places. Other playable Autobots are Optimus Prime, Bumblebee (briefly, in the prologue), Cliffjumper and Jetfire.

Oh, and there is also freaking METROPLEX. Unfortunately, don’t get to play as him, but you can control his targeting at certain times while playing as Optimus Prime and let him obliterate Decepticons. I was really disappointed I couldn’t assume the identity of Metroplex myself and they stuck us just telling him where to shoot. That was a missed opportunity.

Just like in War for Cybertron, the story puts you in the metal shoes of the Deceptions at various stages. This time you get to play as Megatron, Starscream, Soundwave (with the special ability to eject Rumble and Laserbeak!), and two Combaticons — Vortex and Swindle, which leads us to… BRUTICUS. Yes, you get to play as a combiner. It. Is. Awesome. Like Grimlock, Bruticus is virtually indestructible. He can block any type of rocket with his rotating propeller “shield”, smack down any wall in his way and step on all fleeing Autobots (my favorite part).

With two of the Autobots’ Aerialbots (Air Raid and Silverbolt) making cameos, I was hoping we were going to get a Bruticus vs. Superion showdown, but it didn’t happen. There is also a Trypticon cameo which I hoped was going to lead to a battle with Metroplex. That didn’t happen either. More missed oppotunities! Maybe they are saving up all of these awesome moments for a sequel.

Speaking of that, there’s somewhat of prequel game that came out in 2014 called Transformers: Rise of the Dark Spark which crosses over this TF universe with the TF movie universe. The events of that game take place before the Transformers: Fall of Cybertron game and during the Transformers: Age of Extinction movie. It was also developed by a different game studio. Seriously, was it necessary to make it so complicated? Couldn’t they have given the movie the standard garage tie-in game and left this series alone?

Hopefully, we’ll get a proper third entry into this series by the same developers that did the first two games because Fall of Cybertron ends on a great cliffhanger after a gigantic awesome battle in space between the Autobots and Decepticons. Transformers: Return to Cybertron, anyone?

Another thing that makes me love this game is that the developers obviously have a lot of love for the original source. There are various visual and audio references to the original cartoon and animated movie. Some of the the characters’ lines were taken straight from the 1986 animated movie and Starscream’s coronation is a loving recreation from that movie as well. The game even plays Stan Bush’s “The Touch” during the end credits.

This game is a must-have for all Transformers fans.