Chia Zombies and a Batman Halloween costume from 1995

Where I work (which is totally not a Walgreens), I get to see all kinds of interesting holiday items come and go through our doors. One of the coolest Halloween items I’ve seen this year is the Chia (of Pet fame) Zombie line. They come in three different styles: Lifeless Lisa (not pictured), Creepy Holden (not pictured) and Restless Arm (pictured). 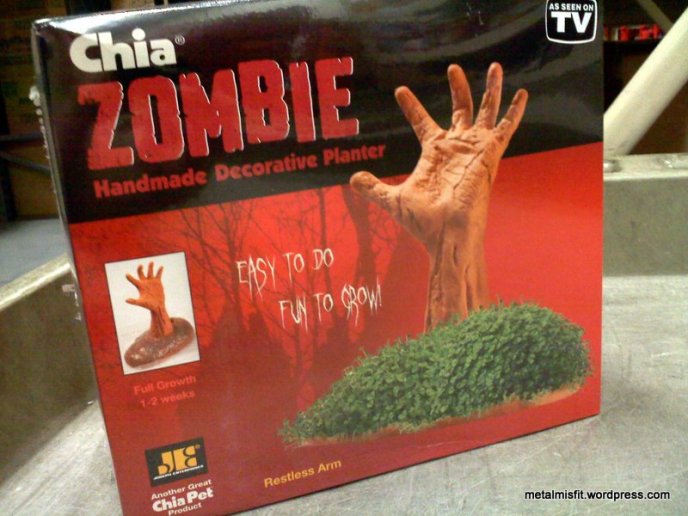 The coolest of the bunch is easily the restless arm. It just makes sense. Do you want a zombie with a comical green afro or do you want a creepy hand coming out the ground of what looks to be a weed-ridden cemetery? I was tempted to buy the restless arm but then I remembered that I’ve never owned a Chia product before and decided to keep it that way.

Matt over at Dinosaur Dracula did buy some Chia Zombies though and has much to say about them. Funny that on the same night I made my discovery, he posted about them just a few hours later.

Last night, I made a critical decision. After years of us trying to sell this one costume, I decided to retire it to the trash. I’m talking about our Adventures of Batman & Robin child’s Halloween costume. I grew up watching Fox Kids’ Batman: The Animated Series like everyone else. It was an amazing show and probably the best animated series of all-time. That was 22 (!) years ago when the show debuted. For the cartoon’s second season, it was re-titled The Adventures of Batman & Robin.

So, yeah. Somehow this Halloween costume has survived NINETEEN YEARS without either being sold or thrown away. Look, Batman is timeless. The costume is timeless. If this outfit had modern packaging, it’d be fine to sell. You would never know it was released when the ’90s cartoon was still new, but c’mon… I can’t believe no kid ever wanted to be Batman. Even harder to believe is that no one ever wised up (until last night) and said, “Gee, this is really old. We should throw it out. Or at least clearance it.”

That’s right! This costume had never been marked down. I price-checked it and it was still ringing up at $19.99. The costume wasn’t in bad shape, it’s just that the packaging was old and beat up and no one was going to buy it looking like that. Finally after years of staring this thing down every Halloween season, I sought approval for trashing this costume and was given the go-ahead.

I actually a felt a bit guilty throwing it out. It was like throwing out a piece of history. This costume was time capsule. A representation of one of the finest animated shows of all time and not some retro piece, it was the real deal when the show was fresh. Even if it was a child’s costume, I was half-tempted to buy (at a discounted price, of course) to save it, but all things must come to an end and I couldn’t justify having a child’s Batman costume hanging in my closet without having to deal with the authorities, so off to the dumpster it went. Obviously, I had to try the mask on before I threw it out though.

You know what else is crazy? The store I work at hasn’t been around for 19 years, but the costume has. So that means it was transferred from another store at some point. That costume survived nineteen Halloween seasons and at least two different stores before getting thrown out!