For the end of the Halloween season, I’ve been trying to watch horror movies that I have never seen or haven’t seen in a while. Funeral Home falls under the “never seen” category, and boy, I wish it stayed that way!

A Canadian production filmed in 1979 and released in that country by Frontier Amusements in 1980 as Cries In the Night, the movie would be re-titled Funeral Home for its 1982 U.S. theatrical and future home video releases. Given the independent distributors and the very low-budget nature of the movie, I imagine this movie probably never made it to a cineplex, but instead could probably have been found as a double feature at a rundown drive-in somewhere. 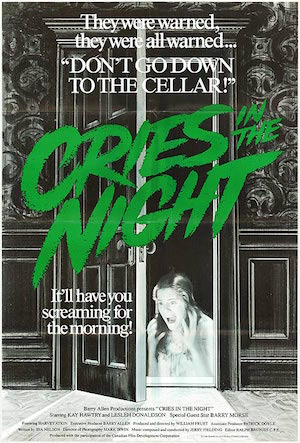 Movie poster for the 1980 Canadian release

The best thing this movie has going for it are the movie posters. The U.S. version makes it look like good cheesy ’80s horror fun, while the black & white Canadian poster makes me think it might be something a bit more shocking. Too bad it’s neither.

Funeral Home‘s trailer does a pretty good job of making the movie seem creepy, but the actual film moves at a snail’s pace and you don’t even seen anyone killed until 32 minutes into the movie. [SPOILER]And even that is just people drowning in a car.[/SPOILER] The movie features very little gore and mostly relies on darkness and the score to help set the mood. In short, Funeral Home comes across as a late night made-for-TV movie and would be ripe to RiffTrax to pick at.

I will say that the ending is kind of interesting, even if somewhat of a cop out.

Check the movie out for yourself… if you dare.