Butch Walker – Over the Holidays and Under the Influence [Album Review] 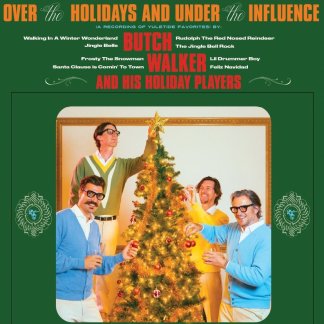 Butch Walker – Over the Holidays and Under the Influence
2017, self-released

Taking a break from hipster indie rock, Butch Walker and his band (the wonderfully titled “Holiday Players” for this album), deliver a loose, upbeat “warts and all” collection of holiday classics on Over the Holidays and Under the Influence. The album cover itself is a parody of The Beach Boys’ Christmas Album from 1964.

Supposedly, the album was a slightly intoxicated rehearsal for a Christmas party in 2016 that just happened to be recorded. Whether that’s true or not, who knows, but it certainly seems plausible given the jovial nature of Butch and the rest of the band. They banter, they break out in banter, they flub notes and lyrics… it really does sound like a bunch of guys sitting around playing and goofing off. It was only once the band realized this could be a fun album that some actual production went into it with the inclusion of horns and some additional percussion. Still, it isn’t over-produced like so many holiday albums are today.

Their version of “Santa Claus Is Coming to Town” is a cover of Bruce Springsteen’s cover, if that makes any sense. And the final track, “Feliz Navidad”, morphs into Wham!’s “Last Christmas” (a song Butch had previously covered) at certain parts.

If you’re looking for touching sentiment, songs strictly crooned in their traditional style or holiday classics to be reinvented in modern pop fashion, move along, but if you want something that clocks in at under 30 minutes, won’t require too much attention and offers a fun & free atmosphere, give this album a spin for the holidays. It’s limited to 1,000 copies on vinyl, but can easily be found on Amazon, iTunes, Spotify, etc.

With a career only spanning three albums (though I’m forever holding out hope a we’ll get a reunion and a fourth release someday), Marvelous 3 became one of my favorite bands and produced one of my favorite albums with ReadySexGo. Marvelous 3 called it quits in 2001 and front man/songwriter Butch Walker surfaced in 2002 with this, his very first solo release.

It’s very much a continuation of what Marvelous 3 had been doing with the great blend of glam, punk, pop and hard rock. Nothing but giant hooks and huge choruses. If M3 had stuck around and followed ReadySexGo with a new album, I can’t imagine it sounding much different than this. Unfortunately, Left of Self-Centered would be the last in-your-face hard rock/pop release by Butch Walker, I guess he’d rather write & produce those types of songs for other artists (Avril Lavigne, Lit, Fall Out Boy, Katy Perry, Pink) than himself because his albums since have been a bit more emo, mellow and acoustic than I would like.

Butch certainly does have a way with words and  great sense of humor. I like how the lyrics flow together and the next line plays off the previous one. The lyrics are almost as enjoyable as the music itself.

“My Way” was the song during the opening credits of the awful Jason Lee/Tom Green movie ‘Stealing Harvard’, if I’m not mistaken.