I can’t believe I haven’t discussed this one yet. After all, I’ve discussed the Mummy and Invisible Man collections and those two franchises weren’t anywhere near as integrated into the Universal Monsters universe as the Wolf Man was.

In truth, I’ve never been a huge fan of werewolf movies. Yes, I know the werewolf is an iconic figure for horror and Halloween but it’s never appealed to me much. Honestly, my favorite werewolf movie is Teen Wolf, if that tells you anything.

I’m not saying a great horror movie based on werewolves can’t be made, but I haven’t seen one yet. I generally think werewolf movies have a very slow pace. For such a primal, powerful monster, it seems like there isn’t much action in these types of movies. It’s more about the curse and torment of being a werewolf or the mystery of exactly what is killing people. Half the movie (or more) is spent building up to the werewolf. You never even see it much. I want a Wolf Man that revels in being Wolf Man, kills often and is shown doing it often as well. 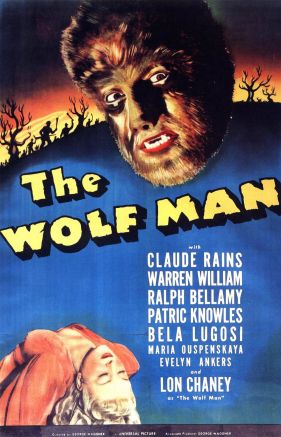 This one features an all-star cast: Claude Rains, Bela Lugosi and Lon Chaney Jr. Junior wasn’t famous yet but he would be after this movie was released. I’ve always looked at The Wolf Man as the second phase in Universal horror. Universal seemed to ramp up their horror output once they had this success on their hands. And with that increased activity, it was the tragic werewolf curse of Larry Talbot that was the one continuing story and driving factor for the brand throughout the 1940s in all of the monster mash-ups.

Of course, Lon Chaney Jr. himself became the studio’s most dependable horror actor (much to his dismay) during this time as well. In addition to always reprising his role as the Wolf Man, he had his turn at playing Frankenstein’s Monster, the Mummy and Dracula during the ’40s.

The Wolf Man is a classic movie with that great gothic Universal horror feel but it’s not on the level with Dracula, Frankenstein or Bride of Frankenstein as far as I’m concerned. I can’t help but wonder if maybe that’s because of Lon Chaney Jr. I’ve never been a big fan of his. He’s always seemed a bit overweight and too average in every aspect to really pull off these roles but I guess that’s why he found success as Larry Talbot/Wolf Man because he was the everyman that the story called for.

This is the very first monster mash-up that Universal attempted. It’s considered a sequel to both The Wolf Man and 1942’s The Ghost of Frankenstein. Chaney had played the Monster in the previous Frankenstein film and while the idea of him playing both leads (with cut-scenes and trick photography) was considered, it was ultimately decided Chaney should concentrate on playing the Wolf Man and another actor should be brought in for the role of Frankenstein’s Monster.

Unfortunately, the studio decided to go with a 60-year old Bela Lugosi. It’s just ridiculous to think of the tired Lugosi playing such a hulking brute, but here he is giving it a go. Ideally, it would be Boris Karloff as the Monster squaring off against Chaney’s Wolf Man but Karloff had smartly decided to stop playing the role after 1939’s Son of Frankenstein.

With the first half hour devoted entirely to the tale of Larry Talbot before Frankenstein’s Monster makes an appearance, this almost feels like two different movies. And sadly, the Frankenstein/Wolf Man battle at the end of the movie is extremely short. Then again, the climax for most of these old horror movies were delivered rather quickly.

Enjoyable, but better and even sillier monster rallies were to come.

END_OF_DOCUMENT_TOKEN_TO_BE_REPLACED

So I finally get to write this. Believe it or not, what became The History of the Universal Monsters was originally meant to be just a list of my favorite Universal Monster movies. Notice I said Universal Monster and not Universal Horror. Though I’ve liked the Lugosi/Karloff pairings I’ve seen in the past month and especially enjoyed The Raven, it is the monsters that keep me coming back for more.

Maybe by this time next year I’ll be knowledgeable enough to have a list of favorite Universal Horror films, but this is the year of the monsters. You’ll notice a lack of The Mummy/Invisible Man/Creature from the Black Lagoon movies. Well, that’s because I’m not all too familiar with those films and many of them I’ve never seen. Hey, I can always update this list next year too, right?

The Wolf Man also does not make my list. While I like the character, the movie doesn’t impress me when compared to Dracula and Frankenstein films. I like the Wolf Man in the monster mash ups, but I don’t think he carries a film well on his own.

It is obvious that the Frankenstein franchise was treated with the most care by Universal (again, the studio showing preference to KARLOFF) and the first two films from that line are two of the most respected movies in horror history. The only Frankenstein movie that does not make my list is 1942’s  The Ghost of Frankenstein.