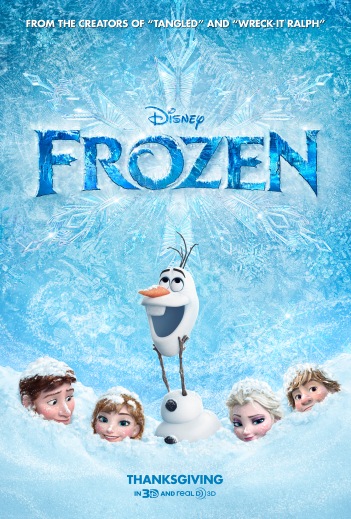 Taking inspiration from Hans Christian Andersen’s “The Snow Queen” fairy tale, Frozen is one of those non-holiday holiday movies. It was released on Thanksgiving Day and the holiday season doesn’t factor in at all. It even takes place during summer. But… BUT, the movie does spend most of its time with the land covered in ice and snow and it features a reindeer and a talking snowman.

So many of Disney’s animated movies are Pixar productions these days that I forgot how much singing happens in true Disney animated films. Within the first 15 minutes or so, the characters had already broken out into three songs. All of the singing certainly does remind you that you’re watching a Disney film.

The reviews for this one have been really good. So good that people are putting on the same level with The Little Mermaid, The Lion King and Beauty and the Beast. I don’t know… It’s hard to say it’s that good. I grew up watching those movies and when you’re a kid, a movie seems so much more special and magical. I think I’m too old by this point to enjoy a movie that much and for it to be able to stand toe-to-toe with nostalgia.

Still, I liked the movie a lot. It’s a great looking film. Then again, snow and ice is always beautiful to me. It’s just as good, if not better, than Wreck-It Ralph. It is a much more traditional Disney animated movie whereas Wreck-It Ralph seemed like it was trying to imitate Pixar.

Before the film, a new Mickey Mouse short was shown called “Get a Horse!” It’s the first original theatrical Mickey short since 1995. It combines the old black & white style of Disney shorts with color and CGI. The execution was interesting but the short itself wasn’t. I’m sure it will be on the home video releases.